Get to Know Your Produce: Organic Kiwi Berries

Get to know your Organic Produce: Kiwi Berries

Our Variety Boxes feature delicious Kiwi Berries this week. Our Kiwi Berries are grown about ten hours east of Boise in Sotherlin, Oregon on a family owned Organic farm. See more of their story and interesting Kiwi Berry facts below. 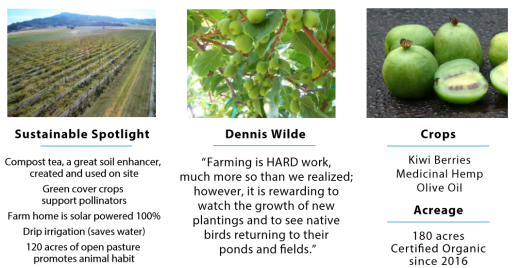 Dennis and Jean Wilde started their farm in Sutherlin, Oregon, in 2012. Dennis had retired but wanted to remain active; he convinced Jean to go into farming, and they purchased 180 acres. Their intention was to plant olive trees for olive oil, thus the name Popeye’s Girlfriend in reference to Olive Oyl from the old Popeye cartoon. In June 2013, they planted 3,100 olive trees, and in December that year a killing freeze took out half their trees, with the other half reduced to stumps that fortunately re-sprouted from the roots. This experience made it clear, olive oil alone was not going to sustain the farm, so they turned to kiwi berries on the recommendation of a neighbor. Kiwi berries are a cold hardy fruit that do well in the Pacific Northwest climate and are becoming popular in the U.S. The Wilde’s now intensively farm 64 acres total, with 26 acres in kiwi berry production and another 22 acres slated for kiwi berries in the coming years. They hope this becomes a multi-generational business that will be attractive to their children and grandchildren, and be a strong source of high quality, organic food into the future.